My last post, Why I am not a Bitcoin investor, sparked a surprisingly positive response both in and out of the comments section – thank you to those who reached out.  Even the Canadian Moneysaver is going to pick it up for an upcoming issue.  It seems there are a lot of investors who share my reservations about cryptocurrencies and are looking for validation.

But not everyone was happy with the article.  One comment got caught in my Matt-it’s-your-blog-and-you-don’t-have-to-publish-every-comment filter.  Here’s an abridged version:

Why the negative attitude? It sure sounds like “old man yelling at the internet”.  Keep an open mind if you want to see the future…not sure if you are familiar with the internet? Amazon? Google? Electric cars?  Just sayin, how can you be so sure it WON’T perform better than your ENB stock…. Change is hard and so is new stuff. Keep questioning and keep learning.

I have no interest in debating this person because insults and ad hominem attacks are rarely the foundation of productive discourse, but the fact that we are clearly so far apart on this got me reflecting on the role of optimism, pessimism, and realism when it comes to investing.

Merriam Webster defines optimism as being “an inclination to put the most favourable construction upon actions and events or to anticipate the best possible outcome.”

Pessimism, by contrast, is “an inclination to emphasize adverse aspects, conditions, and possibilities or to expect the worst possible outcome.”

Optimists are lovely to be around.  They’re hopeful, encouraging, and inspiring.  They can find the silver lining in any dark cloud.  Most people prefer optimists over pessimists because they make us feel better.

Pessimists, on the other hand, see what is wrong and what could be improved.  They’re hard to be around because they point out what is lacking and give us work to do.

Investors are optimists by definition . . . and pessimists

As investors, we must be optimists.  The only reason to invest, fundamentally, is because we believe the future can be better than today.  Otherwise, why not just spend your money now?

But pessimism always plays a role.  Recognizing shortcomings and areas for improvement is integral to the process of making things better.  The rose-coloured glasses of optimism don’t lend themselves well to this dirty work.  Progress means not being satisfied with the status quo.  And change is messy.

Clearly, pure optimism and pessimism are extremes.  I’m sure the comment’s author would object to being labelled a blind optimist as much as I would resist being called a crypto pessimist.  Optimism and pessimism, like so many other things, exist on a spectrum. 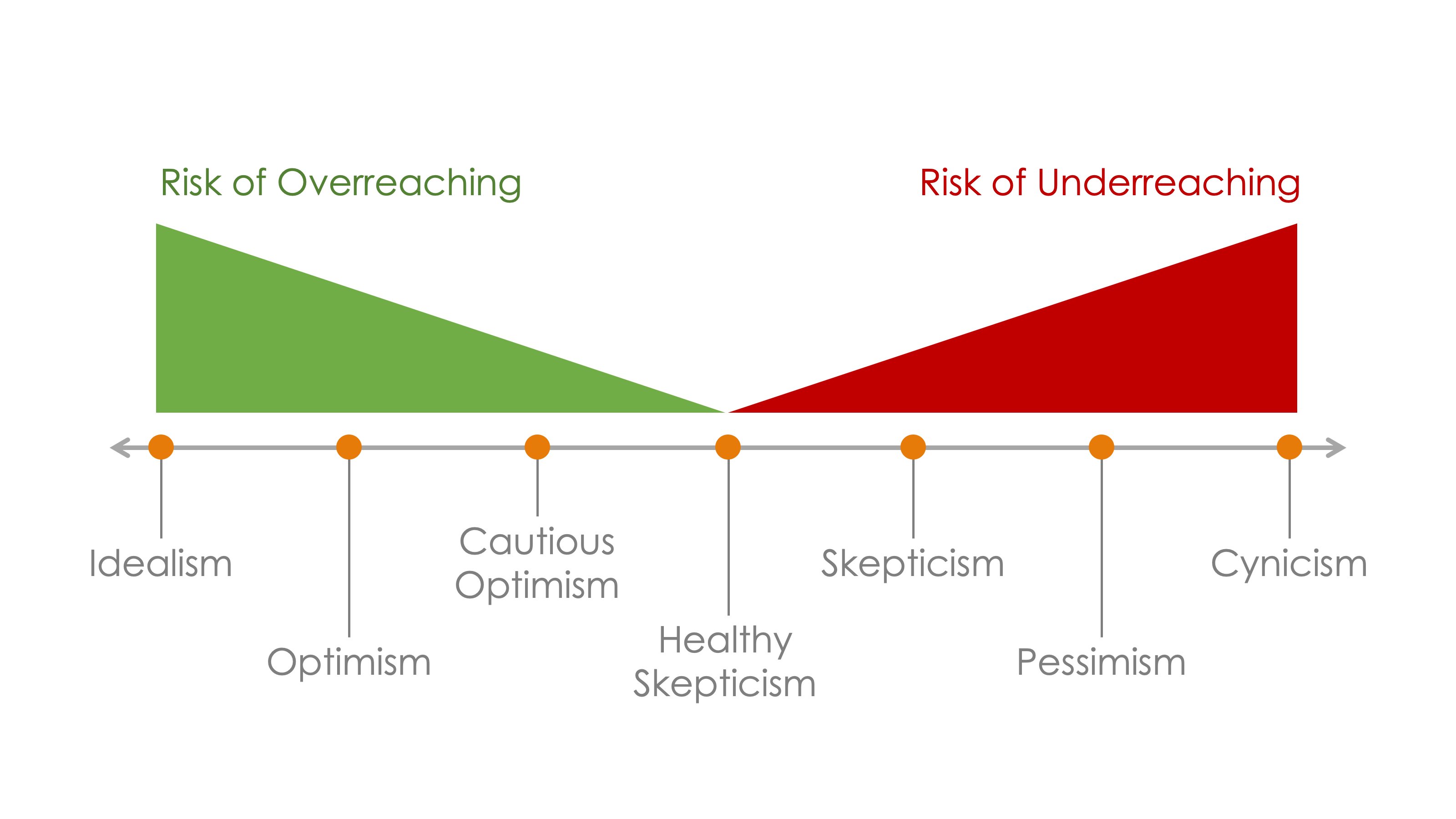 What optimism and pessimism have in common

What optimism and pessimism have in common is a reluctance to look at all the data, to appreciate the full spectrum of conditions and possibilities.  This is rampant in finance: perma-bears focus on all the reasons why markets are vastly overvalued and dismiss possibilities for continued growth whereas bulls in various sectors see all the potential and brush off the risks.  Unfortunately, extreme views are highly correlated with popularity and ad revenue, so the moderates tend to get squeezed out of the conversation.

Confirmation bias plays a big role in both cases: the tendency to interpret new information as confirmation of one’s existing beliefs.  We seem to be wired to prioritize opinions over evidence and it takes a lot of conscious effort to be truly open-minded to the full range of possibilities and risks.

Realism is a mindset in which we try to see things as they really are.  Realists are skeptics who are willing to put in the work to evaluate and balance the problems and potentials.  We strive for this ideal in medicine every day.  We can never be free of our cognitive biases, but we can humbly acknowledge their existence and try to limit their influence on our opinions and decisions.

In the end, it’s not the labels that matter but our actions.  One of the best things about teaching is the satisfaction that comes from putting my knowledge and experience into a format that others are willing to invest their time and money in – what an amazing thing.

But as a writer and teacher, I also feel a duty to you; not to tell you what you want to hear, but to become a better realist with every post and course.  To me, that means openness and skepticism in equal parts plus a willingness to put in the work of challenging assumptions and finding those gems of truth that will help us be better doctors, investors and people.   This will always be a work in progress, but it is work that I enjoy.

Marc Andreessen, an icon of Silicon Valley,  once described his process of testing ideas in the face of complexity and uncertainty as “Strong opinions, loosely held”.  He would embrace his gut reaction, make the strongest and most cogent argument in favour of it, then – and this is key – listen carefully to the dissenters, being open and humble enough to change his opinions as new evidence comes to light or conditions change.   Although it’s often misinterpreted as a license to be stubborn and rigid, “Strong opinions loosely held” is a call to elucidate clearly, listen actively, and evolve intelligently.

I think there’s something to that approach because these are the behaviours that make us better investors – and better people.

Lastly, if you disagree with me on Bitcoin or anything else, please understand you’re not likely to change my mind by calling me an “old man yelling at the internet” (I’m only 46, by the way).  Bring your A-game.  Write a compelling rebuttal.  I will happily read it and share it because that’s how we all get better.  And that’s what I really care about.

Should you invest in segregated funds?

A doctor’s guide to RESPs

If you put your email here, we'll put moneySmartMD content right in your inbox.